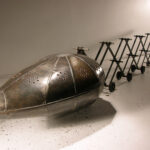 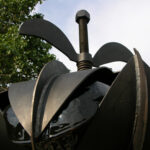 A late night radio news story regarding English Domestic Accidents was most intriguing. Some four hundred and fifty people are injured, maimed or killed annually in the United Kingdom in what were described as “tea cozy incidents”.

It seemed that these largely useless objects (the thermal mass of the teapot dwarfs any gain from the added insulation provided by the cozy) would fall to the floor, causing the unsuspecting victims to slip and hit their heads on a nearby table or other resilient object or surface, resulting in injury or death.

This led to thoughts about tea, an exotic herb beverage and accompanying ritual appropriated by Imperial Britain that became a symbol of Empire, representing temperance, commonsense and daytime hospitality.

Regarding hospitality, as much as it is an expression of goodwill and generosity, it may also be a display of power and means, I thought of our contemporary sense of empire and the fragility of power. Tea is one of the remaining vestiges of a power that colonized half the world less than a century ago.

I attempt to exploit this close and often comic proximity of comfort/protection and perceived threat/fear by changing the scale and surface quality of tea-making utensils. To use contemporary “Rumsfeldian war-speak”, I  weaponize the means of tea production and delivery.